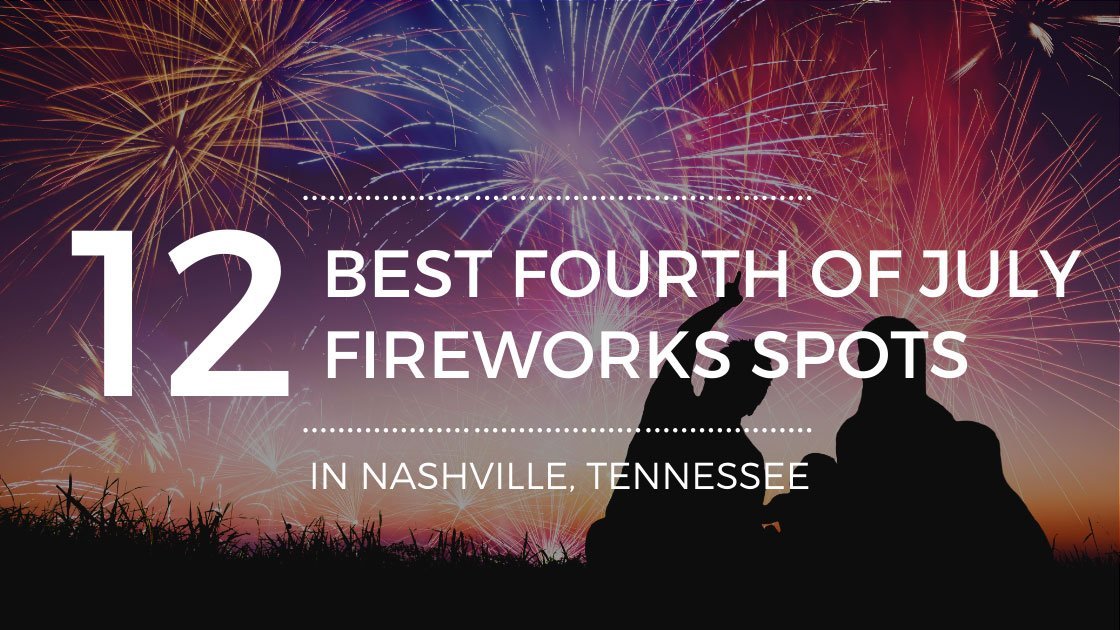 Music City comes to life for the Fourth of July! In the city of Nashville, Independence day is one of the most exciting days of the year. The city boasts one of the largest fireworks displays in the country. Every year, locals and guests watch in awe as fireworks explode and sparkle above the Cumberland River. You don’t have to wait until sundown for the fun to begin. Events like Let Freedom Sing and the Music City Hot Chicken Festival provide all-day entertainment.

Dazzling fireworks, live music, and amazing food await in Music City. Keep reading to get the local scoop on where to watch fireworks and what to do for July 4th 2022 in Nashville.

12 Places to Watch Fireworks in Nashville

If you’ve ever seen one of Nashville’s Fourth of July fireworks extravaganzas, you know it’s a truly amazing experience. Witnessing this breathtaking event is a no-brainer, but finding just the right spot to take it all in can be a little tricky. Below are some of the best places to experience Music City’s Independence Day fireworks spectacular.

Do you like being in the middle of the action? Then Riverfront Park is the place for you. Besides providing a front-row seat for the fireworks, the park is also just feet from other Fourth of July events earlier in the day.

Riverfront Park is the epicenter of the Fourth of July celebrations in Nashville. That being said, it’s also one of the most popular places to watch the fireworks show on the Fourth of July. Those who want to get the best seat in town should plan to get to the park early in the day and spend most of their Independence Day enjoying the food, drinks, and good company while saving a spot for the fireworks show that occurs at dusk.

If you’re one of the coveted few who call a Nashville luxury condominium home—or you know someone who does—then look no further for the perfect place to watch. High-rises like The Viridian in the downtown core, the Rhythm and Adelicia in Midtown, the Encore in SoBro, and the Icon and Terrazzo in The Gulch provide impressive panoramic views from their rooftop terraces, pool decks, and private balconies. These properties offer a comfortable, intimate viewing experience that is second to none.

To truly feel a part of the Nashville fireworks display, those who enjoy the water can actually head onto the river onboard their personal boats. A zone on the river between the Shelby Bridge and Woodland Bridge is closed to boat traffic during the fireworks show as a safety precaution. However, cruising around that zone on the river is still allowed. The General Jackson Showboat offers a 4th of July evening cruise for those who want to enjoy fireworks with a three-course meal.

Revelers don’t always need a fancy party or a jam-packed amphitheater to enjoy the greatest fireworks display in the state. Many Nashville natives simply drive to the top of the towering parking garages within the city and grab a spot early in the evening. From the top of these buildings, there’s an uninterrupted view of the skyline as well as the fireworks, and it’s a wonderful way to celebrate the holiday.

Spanning the Cumberland River between East Nashville and downtown, the pedestrian bridge is arguably as picture-worthy as the fireworks themselves. The view from the bridge is tremendous … and so is the number of people trying to get it. Be prepared for a crowd.

In addition to escaping the downtown masses, watching from the river’s east bank allows you to enjoy the fireworks with Nashville’s iconic skyline as the backdrop. Head to East Park earlier in the day for the Hot Chicken Festival, an annual celebration of Nashville’s one-of-a-kind spicy specialty. (Note: Cumberland Park, located at 592 South First Street, is another great place to catch the show from the East Side.)

The Best Fourth of July Events in Nashville

Although every day may seem like a party when you live near all the fun things to do in Nashville, the Fourth of July is one of the best days of the year here in Nashville. Every year, the city puts on quite the line-up of fun-filled events and festivities that take place all day long, and this year is certainly no different. Although just about every city and town in Middle Tennessee has something going on this July 4th weekend, here’s a quick look at what’s on our radar:

Music City knows how to celebrate our nation’s Independence Day with a bang. Let Freedom Sing! is one of the city’s most popular July 4th festivals featuring several musical acts, including the Grammy-winning Nashville Symphony. The heart of downtown Nashville comes to life with a Family Fun Zone, food trucks, and hours of live music.

At dusk, the largest fireworks show in the city’s history will light up the skies, synchronized to patriotic music from the orchestra. The event is free to attend, but parking can get scarce as dusk approaches. Be sure to arrive early to get a prime spot near the action downtown.

Do a bit of celebrating with some exercise first thing in the morning on July 4, 2022, at the Music City July 4th 5K run. Walk or jog past several of Nashville’s must-see attractions, including the Music City Convention Center. Bring a group downtown to complete the fun run, where every participant will get a surprise giveaway item and a commemorative medal to hallmark the occasion.

Registrants must fill out an informational packet before participating, which can be mailed, hand-delivered, or submitted online. Entry fees range between $50 and $59. This event is a great way to kick off the day and release energy before the evening fireworks shows.

This year, Adventure Science Center’s Fourth of July Bash is titled Red, White, & Boom and is sure to sell out once again. Attendees will have after-hours access to the museum from 6:30 until 9:30 p.m., where there will be several live science demonstrations. The fog cloud event kicks off at 7 p.m., and an exciting bottle explosion session will follow.

Around 8 p.m., the colored fire exhibit kicks off the impressive elephant toothpaste demonstration. Throughout the afternoon, there will be lawn games and numerous hands-on activities. These events lead to the striking downtown fireworks display visible from the museum’s lawn at 10 p.m. Bring a lawn chair to take a break from the various food trucks, music, and themed laser shows.

Parking is free, and members of the museum get a $10 discount on admission and an additional $2 off on the special laser shows. Get tickets early because this event has a limited number of openings for this July 4th spectacular.

When he was a contestant in season 4 of Redneck Island on CMT, country singer Riley Green caught his first big break. From there, he managed to set himself into a solid music career back in 2018 with the hit single, “There Was This Girl.” This song was the lead track on his debut album, Different ‘Round Here, in 2019, which hit the country and pop charts that year.

Riley Green will take the stage around 7 p.m. on July 3rd at the glorious Ascend Amphitheater, with the show wrapping up around 10 p.m. Special guests slated to perform along with Riley include crooner Morgan Wade and country superstar Sammy Kershaw. Tickets start at $28, with upgrades available to the lower levels and the pit. Book early to get the best seats up close to the action on stage.

At noon, this event goes on rain or shine and kicks off with the Fire Truck Parade. The best hot chicken establishments dole up the goods throughout the day, while Yazoo supplies those of age with cold beer. Visitors watch five teams battle it out in the Hot Chicken Amateur Cooking Competition. Live music will be happening on multiple stages long into the night, so be sure to put on those dancing shoes!

A few things to note about the Music City Hot Chicken Festival include:

Restrooms are available in the East Park Community Center. All proceeds from the festival will benefit the Friends of Shelby Park and Bottoms.

Enjoy the Fourth of July in Nashville!

A lot has changed since the country was founded at the end of the 18th century, but people still find a fireworks show a glorious, awe-inspiring display. The Nashville fireworks are notorious for being bigger and better than many typical shows around the country, so getting a good spot to watch them is worth the effort. Choose any spot from this list for an unforgettable fireworks display in Music City.

"How to Drive Long Distance in an EV" Webinar

Tennessee Digital News - June 17, 2022 0
We wanted to compile a list with input from the girls reflecting our top restaurants we've visited for the family. Obviously this isn't a...

Brian and Charles review: a robot comedy finds the sweet side of Ex Machina

Tennessee Digital News - June 17, 2022 0
This review of Brian and Charles was originally posted in conjunction with the film’s debut at the 2022 Sundance International Film...

A hot start as campers return to ‘Roo

Best Places to Watch Fourth of July Fireworks in Nashville

- June 17, 2022 0
Music City comes to life for the Fourth of July! In the city of Nashville, Independence day is one of the most exciting...

Black Carbon From Rocket Launches Will Heat the Atmosphere